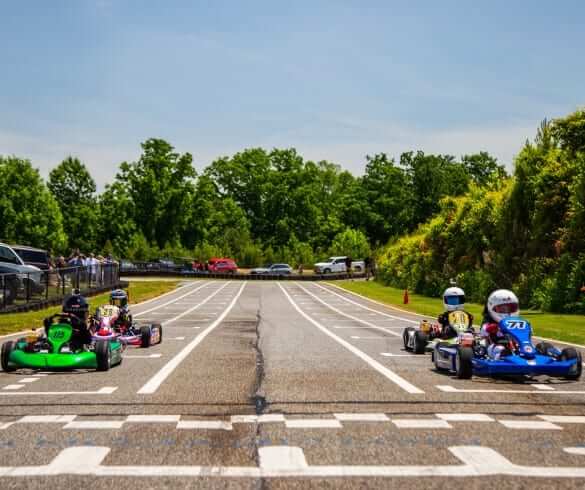 Round three of the 2021 AMP Summer Karting Series kicked off this past Saturday in beautiful Dawsonville Georgia. Race three featured nice weather and great racing.

This final was one of the most exciting races of the day. A great race was held at the front of the pack between Alyssa Vascocu (Junior), Olivier Piatek (Junior), and Noah Ryan (Junior) for most of the race. Leading the field to green, Vascocu and Piatek started on the front row and battled through turns one, two, and three before Piatek took the lead. Vascocu briefly fell to 3rd before quickly moving back up to 2nd.

A collision towards the back allowed the top six to pull away. Joseph Saddington faced heavy pressure from Ryan before he took the position in a battle at turn nine. Ryan advanced to 3rd with ten to go. Soon, Ryan made an attempt for 2nd in turn three and faced pressure from Adam Wein (Cadet) close behind. The top four gapped the field and battled for position with eight laps remaining.

It became a shootout between Vascocu and Piatek. Vascocu advanced to 1st while Piatek dropped to 4th. After being hung out to dry late in the race, Piatek fought to save a podium finish with the remaining laps dwindling. Piatek won his battle in turn two with two laps remaining. On the final lap, the leaders remained consistent while Piatek advanced over Ryan for 2nd. It became a drag race to the checkered between Ryan and Piatek, however, Piatek held position.

Raiden Nicol (Senior) started on pole alongside Matheus Prates (Senior) followed by Craig Foster (Master) and Bobby Garcia (Senior). The green flag dropped and a tight race broke out between the top three. On lap three, the front of the field broke off from the rest of the pack.

Moves were made for the 4th position as Zack Frank (Senior) passed B. Garcia with seven to go. Frank made another move for 3rd as he passed Foster on the backside of the track. Frank gained on the leaders as they battled for position up front. A gap was created between the top three with two laps remaining. Behind them, B. Garcia made a move on Foster that advanced him to the 4th spot. At the checkered Nicol maintained his lead by a kart length over Prates.

Bowen Greene (Rookie), Luke Giglio (Rookie), Matteo Ruggiero (Cadet), and Austin Warner (Cadet) sat top four at the start of this twelve-lap shootout. On lap one a pass was made for 2nd by Giglio on Ruggiero in turn nine. From here the top four held a consistent gap. Greene hung onto the lead until nine to go after Giglio made a pass through the kink. A battle for 3rd came to an end with eight to go as Warner passed Ruggiero through turn nine.

Winding down to the last four laps, the top two made ground on the rear of the field. With lappers in the mix, Giglio and Greene ran side by side into turn four but Greene backed out at the last second. With no change in the lineup, Giglio maintained the lead to the finish by a car length over Greene.

Leonardo Olivera, Jose Garcia, Oliver Piatek, and Cameron Estes started in the top four. The field spread out after lap one. Raiden Nicol, who started 16th, ran through the field to 8th by the end of lap one. With nine laps to go the top four gapped the field and a battle for 2nd broke out. Piatek made a pass on Garcia and claimed the 2nd spot. Garcia dropped to 4th with nine to go as Nicol tailed him.

While the front of the field caught up to the backmarkers, Nicol passed Garcia on the backside with four laps remaining. Coming down to the last two laps Nicol put on a show running side by side with Estes. He claimed 2nd with a pass in turn three with two to go. With no change in the lineup the race ended after 12 laps of tight racing. Olivera was disqualified at the scales which moved the lineup, Piatek became the official overall winner with Nicol winning in his class despite starting 16th.

The top five starting lineup consisted of Matthew Rexrode (Senior), Xander Laws (Senior), Adam Phillips (Senior), Ryan Curtin (Senior), and Brandt Estes (Senior). Shortly after the start, the red flag was shown after a car spun in turn one, the field restarted after the driver was cleared and the kart was safely tucked away.

After reconvening, the field mixed things up. Curtin fell to 13th while Estes passed Laws and Phillips. Rexrode then dropped to 6th, this made Estes the new leader. A gap was made between the top six on lap four. Law spun on lap five which ended his chances at a podium finish. With seven to go Estes led with Shawn DeKold (Senior) close behind. Rexrode made his way back up to 3rd with six to go and battled for 2nd with DeKold. No change in positions as the race settled down, Estes held the lead through the rest of the race. Another red flag ended the race prematurely with two laps remaining.