It was hot and humid in Dawsonville this past Sunday as round five of the AMP Summer Series took place. While the temperature was hot it didn’t stop the intensity as drivers battled it out on the two-mile road course.

As the green flag dropped pole sitter, Jose Garcia, led the field into turn one. Raiden Nicol started 2nd and waited to make a move for the lead on the opening lap. As the leaders raced to the line, Nicol looked to the inside of Garcia and took position under braking as the new leader in turn one. Scott Carlisle, who was in fifth, spun in turn one and fell to the back of the pack. A gap of six-tenths separated the top two with five laps completed. As the leaders came to the line Garcia went side by side with Nicol into turn one. Garcia inherited the lead through the carousel after a short battle with Nicol in turns two and three. Seven minutes remained as Nicol chased Garcia with only two-tenths separating the two.

While a race for the lead was underway, Keith Williamson and Blakely Fabiani battled for the 3rd spot. Williamson held an almost two-second gap on Fabiani when he had a mechanical failure that brought his race to an end, allowing Fabiani to inherit third. Ten laps in, Garcia passed Nicol, in turn, one for the lead. Headed into turn four, Nicol passed Garcia on the outside to reclaim position. Garcia didn’t hesitate to make a pass after Nicol braked early coming into turn six, Garcia inherited the lead with ten laps completed. Three minutes remained as Nicol chased down Garcia into turn one and completed a pass, Garcia then took back the lead in turn three. With time running out, Nicol ran on the bumper of Garcia. The white flag came out and no position change was made. Garcia took the checkered flag with Nicol and Fabiani behind.

Jose Garcia and Raiden Nicol led the field to green in this final race. Garcia pulled out front into turn one as Nicol tucked in behind. Blakely Fabiani ran in 3rd while Chris Huhn in the E30 challenged him for position. Scott Carlisle moved through the pack as he passed Huhn and Fabiani for 3rd into turn one. Nicol remained on the bumper of Garcia with just a tenth separating the duo.

Four minutes into the race Keith Williamson charged through the field after his retirement in race one to take the third spot from Carlisle. Williamson was 3.1 seconds behind the leaders coming into lap five and continued to gain on them as they battled ahead. Nicol looked to find his way around Garcia but couldn’t complete the pass. By lap seven a 1.3-second difference was between the leader and Williamson.

Braking into turn one, Nicol made a pass for 1st but Garcia reclaimed position in turn three. Williamson closed the gap making it a three-car battle for 1st. Nicol took the lead into turn one before Garcia made an attempt to reclaim the position, however, Nicol remained the race leader.  As time winded down Garcia couldn’t make any moves for 1st. Nicol started to gap Garcia while Williamson battled for 2nd. On the final lap, Garcia went side by side with Nicol into turn one but couldn’t make any moves. As the tight race came to an end, the checkered flag was waved for Nicol while Garcia and Williamson rounded out the podium. 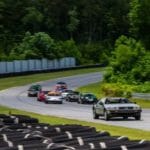