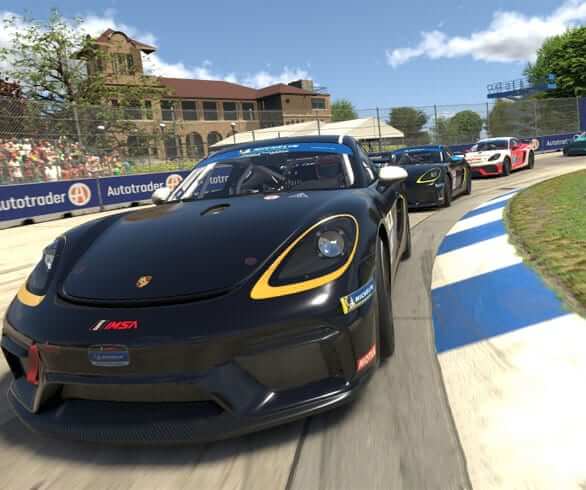 Excitement and great battles from start to (nearly) finish

The inaugural AMP eSeries kicked off the series with the jewel of the southeast at Daytona International Speedway. With a special guest appearance from Felipe Nasr and his close friend/engineer Felipe Moises, the field was packed with tight competition from front to back. Dion Fiallo Started pole and showed no intentions of letting the lead change as he pulled clear of the field soon after taking the green flag. The mid field saw tons of action as Felipe Nasr started his charge to make his way up the grid. Fred Hazleton, Sunny Chen, and Nasr all found themselves in an airtight 3-way battle nearly all the way to the checkered flag to round off the opening race of the eSeries.

Race 2 saw the grid move to the neighboring circuit at Sebring International Raceway. Sebring proved to be quite the challenge for the drivers as everyone was constantly battling the bumps and tight turns to keep their lap times down. The front field saw Fiallo starting pole once more with tight competition from Brandt Estes. Fiallo managing damage from contact during the pace lap saw himself filing in behind Estes going into T1 at the green flag. Fiallo went on to set some blistering times to get back in front of Estes and hold the lead. Estes however left no room to breathe for Fiallo as he kept the pressure on the leader through the rest of the race. The battle for third saw an equally exciting battle as Patrick Wilmot and Michael Day went tooth and nail against each other, constantly swapping positions through the race. Contact 30 minutes into the race heightened the tension between the two drivers for 3rd place. Tensions peeked coming out of the final turn heading to the checkered flag as Wilmot lost the rear of the car, spinning and collecting Day with him. Day went on to take 3rd place and rounding off the exciting finish for an action-packed round 2.

The caravan came home to Road Atlanta for Round 3 of the eSeries. Being the home the home track for most of the field, everyone was eager to see good results out of round 3. Fiallo extended his qualifying dominance by taking his 3rd pole in a row to lead the field to the green flag. A curveball got thrown to the field as starting procedures where switched from a rolling start to a standing grid start. 5 red lights went out and the green flag was dropped on a position hungry field. Mostly everyone filed into T1 incident free with Fiallo leading the pack into the esses. Hungry for a win after losing the lead in Sebring and keeping pressure through the race, Brandt Estes was back to put pressure and looking to claim P1 from fast running Fiallo. Estes and Fiallo would not be able to pull away from the field however as young kart racer, Max Muir had other plans for the front runners. Muir passed Estes on the long straight and had his crosshairs set on Fiallo and the lead. Putting heavy pressure to take the lead, Muir battled hard with Fiallo going 2 wide into turns to try and take P1. In the end however, Fiallo turned up the pace and stayed ahead of battling Estes and Muir to claim a 3rd win in a row. The mid pack also saw plenty of action as Flip Crane, Zack Holden, Fred Hazelton, and Ryan Flannery all kept the mid field tight and filled with 2 wide action through the turns to tie up the action for round 3.

Week 4 had the pack headed up north to New York for Round 4 of 5 at Watkins Glen International. With 1 race left after this round, it’s crunch time for a lot of the grid to place well to move up in the series standings.  Having been denied a win for 3 wins, Estes was keen on turning his luck this time around. With Dion taking his 4th pole, the stage was set for an exciting race down the field. With the green flag dropping the mid field frenzied as everyone battled for inches to make their way up the field. A spin mid race from Fred Hazelton caused a on track incident that shook up the field adding to the late season drama. Up at the front, Estes had his weapons sharp and was ready to pounce. With the halfway point behind them, Estes took a deep lunge into the bus stop to finally take the lead from Fiallo. With Dion behind him, Estes needed to keep himself ahead. The next 20 minutes turned into an all-out war between these two drivers to see who could take the checkered flag. Fiallo would get massive runs going into T1 to get alongside Etses however, Brandt had unbreakable resolve to keep his lead and take his first victory. Out breaking and defending would keep Estes in the lead until the last lap where Dion made one last lunge into the boot to try to take the lead. With worn tires and shot brakes, Dion drifted into Estes making contact and turning his competitor. Out of good show of sportsmanship, Fiallo lifted off and waited for Estes catch up and take back the lead granting Estes his first long awaited victory.

The final round brought us back to the jewel of the southeast at Barber Motorsports Park. It was business as usual at the front with Fiallo and Estes fighting bumper to bumper for the lead of the final round. With Brandt hard on Dion’s heals, the slightest error came at the cost of victory. Farther back in the field was a heavy 4-way battle in the mid-field to claim the final few points scoring spots. Between battling on track and keeping the car on track through the tricky turns of barber, the final round was going to be a hard one to come out on top. With the final checker of the season in the air, Dion pulled ahead gapping 2nd place after barely avoiding a spun car ahead of him to secure his 4th and final win of the season. Dion Fiallo took a commanding championship win with Brandt Estes finishing a close 2nd and Ryan Flannery taking the final step of the championship podium. All 3 are receiving prizes thanks to our series sponsors of OMP and Discovery Parts.

Season 2 is set to go green in early June to keep the action going. If you are interested in getting a shot at racing in this competitive field, join our official AMP Discord to keep up to date with series announcements and release dates!