What’s New in the World of Mustangs? 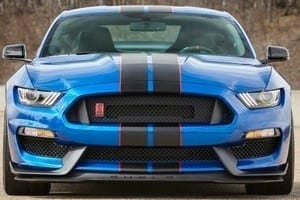 Mustangs have gone through an exciting evolution since their dark ages in the ‘70s and their salvation from Hot-Wheels-inspired designs in the ‘90s. It seems like no matter what Ford adds, changes or takes away, there will always be something new and exciting happening in the Mustang community that is sure to arouse debate.

In this spirit and to give people something to sink their teeth into, here are the top Mustang stories bouncing around the internet these days.

2017 Ford Shelby GT350 Rolls Out with New Colors and Options

With a nervous eye on the 2017 Camaro ZL1, Ford is making the next version of their Shelby Mustang track-ready out of the gate. This means their Track Package that includes MagneRide adaptive dampers, heavy-duty front springs, an aluminum strut-tower brace, a special rear spoiler, a drive mode selector and added cooling comes standard. While these additions may make the vehicle a bit more expensive, it also rules out the chance that your GT350 can be accused of being a track car in name only.

In addition to the track-friendly mods, Ford is adding three new colors: Ruby Red Metallic, Lightning Blue and the classic, eye-catching Grabber Blue. They’ll also let you add back in options like a rear seat and a leather replacement for the Recaro seats.

In a surprising development, the Mustang outsold German sports car standbys like the Audi TT and Porsche 911 this past March. In fact, Mustang has beat out all Porsche models overall since the start of 2016. While it may be true that Europe is simply living out their fantasies of having access to the first official international Mustang release ever, it’s still nonetheless impressive to see such a high demand for American muscle on the autobahn.

Get more details and the sales numbers here.

The Inventors Hall of Fame in Canton, Ohio offers a unique look at the Ford Mustang for their 50-year anniversary exhibit. Actually, it’s multiple looks. Like a chameleon seeing through time, the exhibit smashes up 60 percent a sixth generation ‘Stang alongside the original 1964 Pony Car for a side-by-side comparison that shows just how we’ve come and what we left behind.

Get a look here.

Riding a decidedly un-stock Mustang RTR rumored to have over 900 horses underhood, Vaughn Gittin, Jr. took home the gold this past Mother’s Day weekend in the only competition where spinning in circles gets you somewhere.

Get the full run-down here.

We’re going to use the whisper font on this one because it’s all rumors and hearsay at this point, but some people in the investment world seem to think that the next all-new iteration of the ‘Stang will roll out in May 2020, two years ahead of its previous scheduled 2022 debut. Predicted to be codenamed the S-650, some are saying that Ford is winding back the release date to compete more ably with the outperforming but underselling new Camaro.

Got any Mustang news tips or highlights we left out? Let us know in the comments!