A rain-soaked track that caused the Downforce class not to run also led to some upsets in the Spec Miata and E30 classes on Saturday at Atlanta Motorsports Park.

The first upset of the afternoon was Jack Stanford defeating Ty Young in Race 1 of the Spec E30 class. This was the first time all season that Young did not finish first in any race in the E30 class.

Not only had Young never lost, he had never been challenged winning all his races in dominating fashion. However, after finishing second behind Young in both races in March, Stanford found that extra gear he needed to defeat the front-runner who seemed like couldn’t be caught.

A Race 1 win was great, but race day in the Spec Miata/E30 class is a two-race affair and Stanford was determined to show that his first win wasn’t a fluke.

Young started out on the pole, but it didn’t take long for Stanford to move in front making the pass in Turn 6 on Lap 3 to take the lead. However, being the champion that he is, Young would not go away without a fight.

For the next five laps, Young wouldn’t give Stanford an inch of space. It was side-by-side racing in every straightaway. Their cars were dead even on speed, Young’s only chance to make the pass was to outbreak Stanford in the turns.

Young tried again and again in Turns 1 and 6 but just never could make it stick. Stanford used the inside position to fend of Young in every single corner for the remaining 10 laps of the race, hitting his marks perfectly to take the win in Race 2.

With his two race wins, Stanford took the top spot on the podium with Young settling for the step below. Behind Stanford and Young, Matthew Agurkis finished third in both races to round out the podium. As the only other contestant of the day, Michael Young finished fourth despite being well off the pace in Race 1 and not finishing the race at all in Race 2, retiring his car after six laps.

Jason Bergstrom won his second consecutive race day via the fastest lap tiebreaker although this time it wasn’t Keith Williamson who forced the tie, it was Jose Garcia who pushed Bergstrom to the brink.

Garcia had a stellar performance in Race 1 to take the win over Bill Miller and despite finishing a full nine seconds behind Garcia, Bergstrom was able to finish third to remain within striking distance of the overall win.

The same couldn’t be said about Williamson who struggled with the wet track to finish a lap down in last place, all but eliminating the February winner from this month’s title contention.

With the cars back in the garage, the drivers went to work making adjustments to better handle the track conditions before the start of Race 2.

Williamson started on the pole, and after making the proper adjustments, was able to stay on the track and in the lead for the first couple of laps with Bergstrom in second place.

After the start, Garcia settled into the third position and without a challenge from fourth and fifth place cars driven by Jerry and Bill Griffin respectively, Garcia would clinch the overall win if Williamson held off the hand-charging Bergstrom.

That train of thought was short-lived, however, as Bergstrom made the pass outbreaking Williamson in Turn 1 on Lap 3. Williamson stayed on Bergstrom for as long as he could but by Lap 5, Bergstrom started to pull away creating a five second lead over the next five laps.

During that time, Garcia got stuck behind the slower traffic of Spec E30 driver Agurkis, struggling to make the pass over the course of two laps. By the time Garcia made the pass stick, Williamson and Bergstrom were out of reach.

Garcia finished third and Williamson was never able to close the gap on Bergstrom meaning that with a first and third place finish apiece, the fastest lap tiebreaker would be used to determine the overall winner for the third-straight month in the Spec Miata class.

Both drivers recorded their fastest lap in Race 2 where track conditions were a little dryer and Bergstrom recorded a best lap of 1:36.448. Garcia’s Race 2 was not as strong as his first resulting in a best lap time of 1:37.675, more than a second off of Bergstrom’s pace.

Williamson was able to salvage a podium spot after Bill Miller was forced to retire his car in Race 2 after just the second lap resulting in a DNF which awarded no points to Miller, while Bill Griffin was able to make the pass around Jerry Griffin towards the end of Race 2 to clinch a tie between the two Griffins for fourth place overall. 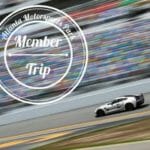