The LO206 Cadet class had provided some of the closest racing all year and the championship came down to the final race of the season. Alyssa Vascocu went into the final round with a slim lead in the standings but if she finished third or worse and Oliver Piatek won she would lose the championship.

Vascocu started on pole but Oliver Piatek wasted no time in making a move for the lead as he dove down the inside of turn one. Joseph Saddington and Adam Wein settled into third and fourth and maintained contact with the front two in case they made a mistake. Vascocu continued to pressure Piatek but the latter had a top speed advantage which allowed him to retake the lead at turn nine if he had lost it earlier in the lap.

With five laps to go, Wein and Vascocu made contact at the final corner and Vascocu fell to fourth, a championship losing position. She wasted no time in taking back second and was right back on Piatek’s bumper with two laps to go. On the penultimate lap, she passed Piatek at the final corner securing the race win and first in the championship. Piatek made contact with Saddington through the kink on the final lap and lost even more time dropping him to fourth at the finish. Wein finished second and Saddington rounded off the podium in third.

Henry Brass (Senior) started on pole and quickly created a comfortable gap by setting several fastest laps of the race. Jose Garcia (Master), who started last, wasted no time cutting through the field as he moved into third by lap five. Garcia dispatched John Davis (Senior) on the next lap but wasn’t lapping quick enough to close the gap to Brass whose lead had grown to 13 seconds.

With four laps to go, Brass was forced to retire from the lead of the race with a mechanical issue in heartbreaking fashion after dominating the majority of the race. Garcia inherited the overall lead and won by seven seconds despite starting last. Mike Bruce and Craig Foster rounded off the masters class podium while John Davis finished ahead of James Long in the senior class.

Vincent Capitillo (Cadet) started on pole with Austin Warner behind. Warner was unable to keep up with Capitillo but both drivers kept it clean and finished one-two as the only two runners in the cadet class.

In the rookie class, Bowen Greene started first with Luke Giglio and Lillian Scarbrough behind. Greene and Giglio stayed bumper to bumper for the entire race but Giglio was never abe to gte close enough to make a move for the lead. Greene won by just under three-tenths of a second over Giglio while Scarbrough finished third, two laps down.

Raiden Nicol (Junior) started on pole with Spencer Lofton (Senior) and Jose Garcia (Senior) behind. Nicol maintained the lead through the opening laps but a tangle in the midfield caused four drivers to spin at turn two on lap one. On lap three, Lofton passed Nicol for the lead at turn one and slowly created a small gap.

On lap seven, Nicol was passed by Garcia under braking into turn nine. Nicol stayed glued to Garcia’s rear bumper in the closing laps and on the last lap Nicol was able to make a better exit coming out of the final corner to pass Garcia at the line by 0.024 hundredths of a second.

The rain made an arrival just in time for the LO206 seniors to take to the track with some drivers opting for slick tires in the damp conditions. The drivers who switched to wet tires had a big advantage but thankfully everyone was able to keep it clean despite the challenging conditions. Al Edwards started on pole ahead of Carson Craig and Daniel May. The top three stayed the same for the entire race while the rest of the field fought for the remaining places. 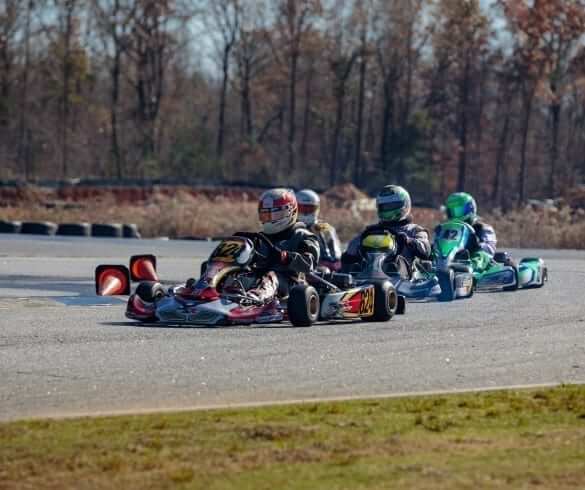