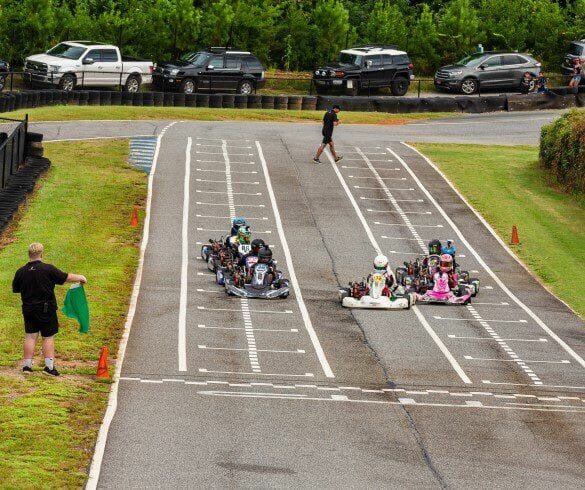 It was a cloudy and cool day for round six of the AMP Summer Series. As the rain held off, drivers battled it out for points as the Summer Series winds down.

Kai Mars, winner of the pre-final, started on the pole along with Joseph Saddington and Luke Giglio following from behind. They held position through turn one before Giglio attempted a move down into turn two but he was unable to make it stick. Adam Wein took 3rd over Giglio through the esses. Heading into turn 16 Saddington passed Mars for 1st on lap one.  Two laps later a local caution came out as Warner lost his chain in turn two. By lap four, the top four had broken away from the rest of the pack and they battled for position over the remaining laps.

Mars passed Saddington for the lead on lap eight through the esses. Saddington reclaimed 1st on the next lap. Mars and Saddington had contact and spun in turn two allowing Wein to inherit the lead. With Giglio following close behind in 2nd, Wein led the field into lap ten. On lap 11 Giglio made a move for the lead on Wein in turn nine. The white flag waved for Giglio and Wein, but as they headed down the hill Wein reclaimed the lead. Wein was able to hang on and lead Giglio over the line as Saddington rounded out the podium.

Leonardo Olivera (Senior) started on pole alongside Jose Garcia (Master). Behind the top two Donald Davis (Master) and James Long (Senior) were eager to force the top two into a mistake. At the start, Leonardo gapped the field with Garcia being chased down by Davis. Garcia and Davis were passed by Daniel Perez at the line on lap two. This put Perez in 2nd and Garcia in 3rd. By lap two, Olivera had a two-second lead. On lap three, Perez had a mechanical failure as he raced up the hill, this allowed Garcia to reclaim 2nd.

With Perez out of the race, Garcia set his sights on Olivera. With a five-second lead, Olivera remained the leader through the remainder of the race. By lap six, the field was spread out, Mike Bruce (Master) held a tight race with Davis for 3rd. No position changes were made until lap 11 as Bruce moved into 3rd on the backside of the track. Olivera comfortably took the checkered as Garcia and Bruce rounded out the top three.

Austin Warner (Cadet), Luke Giglio (Rookie), and Bowen Greene (Rookie) led the field to green and Warner immediately jumped out front while Giglio and Greene followed. Isaac Carvalho spun headed down the hill on lap two taking him out of contention, and promoted Maddox Thoman to 4th. Giglio remained bumper to bumper with Warner. On lap six, Giglio attempted a pass exiting turn two but couldn’t complete it.

Greene remained in 3rd, only .2 seconds behind Giglio. By lap seven, the top three had an almost three-second gap on the rest of the field. With four laps left Warner remained the leader with Giglio right behind. Giglio attempted a pass through turn two on lap ten but couldn’t complete it. No position changes were made through the remainder of the race. The top three podium finishers were Warner in 1st, Giglio in 2nd, and Greene in 3rd.

No position changes were made until lap seven when Laws inherited 2nd over May through the esses, behind Al Edwards and Adam Philips chased them down. By lap 10 Estes held a 3.6 second lead over Laws and May. No position changes were made until the final lap. As they came to the checkered May was able to reclaim 2nd after he passed Laws in turn 16. The podium consisted of Estes in 1st, May in 2nd, and Laws in 3rd.

Alyssa Vascocu, Logan Buice, and Noah Ryan made up the top three at the start. As the green flag dropped Vascocu took the lead with Ryan behind. Down the hill, on lap two Oliver Piatek passed Buice, Ryan, and Vascocu to inherit 1st. Coming to the line on lap three Vascocu took back 1st. On lap four headed into turn two, Piatek looked to pass Vascocu but came in contact with Ryan. As a result of the contact, Ryan spun and fell back to 6th. Piatek was able to pass Vascocu and took over as the leader. On lap seven, Vascocu passed Piatek for 1st as they raced down into turn two.

Piatek attempted to reclaim 1st through the esses, but after coming in contact with Vascocu he was unable to complete the pass.  Towards the end of lap seven, Spencer Mast passed Ryan for 3rd on the backside of the track. Coming out of turn two Ryan reclaimed 2nd over Mast with three laps remaining. Piatek passed Vascocu for 1st coming out of turn five but Vascocu reclaimed the lead as they exited out turn 16 to take the white flag.  Piatek battled back through turn two and inherited 1st. Vascocu crossed Piatek over through turns nine and ten as they fought for position coming to the checkered. Ryan, who had recovered after spinning earlier, was on Piatek’s bumper and attempted to pass for 2nd as they crossed the line but couldn’t clear him. After penalties were assessed Vascocu came in 1st, Ryan in 2nd, and Spencer Mast in 3rd .