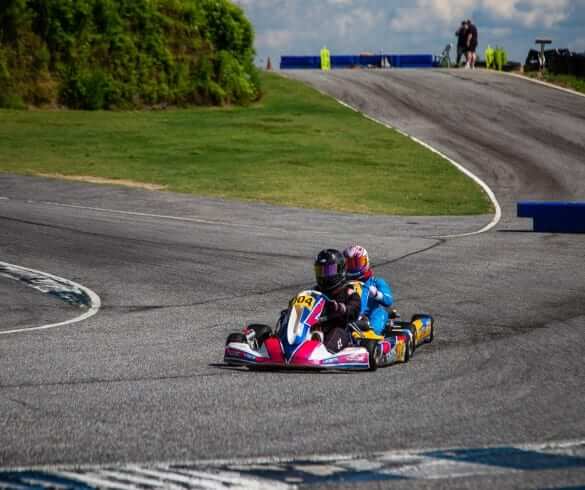 It was a hot and dry day at Atlanta Motorsports Park as drivers competed in round four of the AMP Summer Series. Throughout the day there was a lot of great racing and action.

Leonardo Olivera (Senior), Matheus Prates (Senior), Jack Mangrum (Senior), and Craig Foster (Master) started top four of this ten-lap race. Just at the start, the field stormed down the hill as Prates jumped out front and led the pack into turn three. Behind the top two, Foster gained a position and Mangrum dropped to 5th. Olivera then took the lead back through the esses over Prates. With a little over a tenth of a second lead, Olivera stood as the leader going into the second lap of the race. The top two created a five-kart length gap between 3rd and 4th.

With eight laps to go, Mangrum brought pressure onto Foster as he had taken over the 4th spot. Through lap three Prates was bumper to bumper with Olivera, the two holding an almost four second lead from Foster and Mangrum. Things were quiet through laps three and four, but Jose Garcia gained the 5th position through the esses on lap five. The top two still held their gap and Mangrum created a two second lead over Foster as the laps wound down.

With two laps left, Mangrum gained some speed on the top two. Olivera, still tailed by Prates, held a tenth over 2nd place with one lap remaining. As the checkered flag was waved, there were no moves Prates could’ve made to gain position. Olivera took the victory while Prates and Mangrum rounded out the podium.

Bowen Greene started on pole (Rookie) with Matteo Franco (Cadet) alongside. Following them was Kai Mars (Rookie) and Ryan Peres (Rookie). As the green flag was waved Franco opened a lead on Greene. Austin Warner (Cadet) made big moves through turns seven, eight, and nine as he gained two spots that put him in 5th. By lap two the top three had created a three second gap from the rest of the pack. On lap two Greene and Mars passed Franco on the backside. Coming to the line, Warner passed Peres for 4th. Greene ran away with a .6 second lead while Mars and Franco battled it out in turn seven. Franco completed the pass for 2nd in turn eight on lap three. With six to go, Franco gained some ground with being just nine tenths behind Greene.

Things settled down with four laps to go. Warner made up ground quickly as he gained on Mars with three to go. As the two entered turns eight and nine they went side by side. By turn ten Warner passed Mars. Isaac Carvalho (Rookie) took the 5th spot from Peres on lap eight. With less than two laps left, the top four separated into two packs. The top two held almost a two second lead over 3rd and 4th. Franco, three tenths behind Greene, gained some ground with one lap to go. The checkered flag dropped and no change in position was made. Greene took home the win as Franco and Warner followed.

Top four consisted of Leonardo Olivera (Senior), Jacob Schneider (Senior), Spencer Mast (Junior), and Anthony Hyman (Junior). At the green Olivera took off with Mast right behind. Through turns eight and nine Schneider took back 2nd over Mast. Coming to the line on lap two Schneider peaked inside of Olivera but couldn’t complete the pass. By lap three Olivera and Schneider held a 2 second gap on Mast. Things shook up in the back as Oliver Piatek (Junior) and Shawn Dekold (Senior) created a close race through the esses on lap three for 5th.

Coming to the fourth lap, Dekold spun in turn 16 which let Piatek take position. The local yellow was lifted and the race for 1st intensified as Schneider peaked around Olivera into turn 16 coming to the halfway point of the race. With five laps left the top two held a .5 second lead over Mast. Through turns eight and nine the top two exchanged passes but Olivera remained the leader coming to the line.

Four to go Olivera held a kart length lead over Schneider. In the back of the pack, Hyman passed Piatek for 5th. Piatek returned the favor but hopped a wheel while he attempted to pass Hyman. Both spun with three laps left. On lap nine Prates passed Mast through the esses. With an attempted crossover coming to the line, Schneider didn’t have enough momentum to complete the pass. Olivera took 1st while Schneider and Prates followed.

The top three held a three kart-length gap on Lassiter and Rexrode while they were bumper to bumper. The race upfront became stagnant almost half way through. Rexrode made a pass on the backside taking 4th coming to lap six. With two laps to go, Rexrode passed Craig at the line for 3rd place. Coming to the white flag the race intensified with the top four but no positions changed. Bumper to bumper they raced to the line for the final time. Rexrode made a last second attempt to pass Phillips but it was incomplete. Estes won with Philips and Rexrode behind. Rexrode was disqualified at the scales which put Craig as the official 3rd place winner.

Sitting on the pole was Austin Warner (Cadet) and Anthony Hyman (Junior). Behind the pole sitters sat Alyssa Vascocu (Junior) and Adam Wein (Cadet). At the start Warner ran off with a lead as Hyman fell to 4th. Vascocu held her 2nd spot while Wein followed in 3rd. Warner held a one second lead over Vascocu by lap two while Hyman was getting chased down by Spencer Mast (Junior) for 4th. With seven laps to go Warner held a .5 second lead as Vascocu was being tailed by Wein and Hyman.

Joseph Saddington (Cadet) made his way through the pack as he passed Mast through turn 11. Saddington passed Hyman by lap four and started to create a three-car length gap on Mast. Warner remained the leader as the laps wound down. Wein and Vascocu battled it out into the last remaining laps. Coming to lap eight Wein passed Vascocu in turn 16.

With two laps left Vascocu created a huge run through turn ten. Vascocu tucked in behind Wein’s bumper coming to the white flag. Vascocu set up and completed the pass on Wein coming into turn ten on the last lap. Wein didn’t give up as he attempted to pass coming to the line but it was incomplete. Warner took home the win as Vascocu and Wein followed.