The final round of the AMP eSeries at Homestead Miami Speedway promised drama as Ryan Flannery led the standings by just six points over Michael Green. Peter Hutchings led the 100 lap Destination Dawsonville race to green.

Michael Green slotted into second with Flannery right behind in third during the opening laps of the race. Everyone kept it clean as drivers tried different lines early on. Hutchings, Green, and Flannery formed a leading pack ahead of the rest of the field.

Further behind in the midfield drivers swapped positions constantly while Green made a move for the lead and immediately opened up a comfortable gap. On lap 22, championship leader Flannery dropped to ninth from third further helping Green’s attempt to take the lead in the standings in the final race.

Flannery’s race only got worse as he stopped on lap 36 for tires and fuel and locked up as he entered pitlane. He made slight contact with the wall but did avoid a penalty for speeding in the pitlane. Green and Michael Lane stopped on lap 40 under green flag conditions as well. Flannery’s early stop moved him into third at the halfway point of the race.

On lap 53, Lane and Flannery made contact sending Flannery up into the wall. He dropped to seventh but the green flag stayed out since he didn’t spin. Meanwhile, Green opened up a 13-second lead out front.

Flannery and Lane both made their final stops before the rest field trying to repeat the jump they made during the first pit cycle. It didn’t pay off and Flannery stopped again on lap 92 which put him a lap down.

Green coasted across the finish line eleven seconds ahead of Jacob Mink in second. Michael Day, Hutchings, and Carroll. Green clinched the title in a caution-free race. 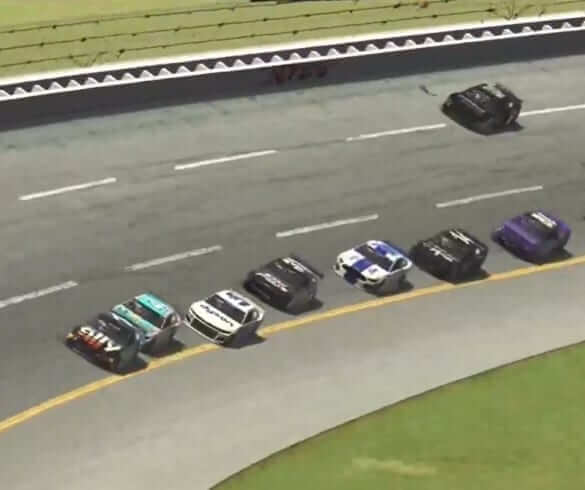