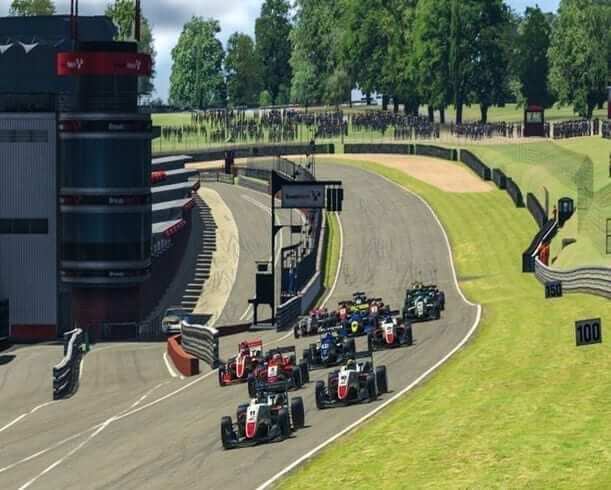 For the fourth race of the Atlanta Motorsports Park eSeries racers visited a virtual Brands Hatch Circuit in Kent, England. The Bojigglies 53 featured plenty of headlines after a photo finish in the prior week’s race and the return of Dion Fiallo to the field after winning the championship in season one of the eSeries.

Fiallo opted to start from the back of the grid since it was his first race in the series while Brandt Estes started from pole, looking to make it two wins in the last two races. Championship leader, Cameron Dance started second followed by Max Muir.

Estes ran wide through turn one but managed to hold on to the lead under braking into turn two. Dance made a strong run out of two and tried to go around the outside of Estes through turn three but ran wide. Dance dropped down the order and was involved in a collision in the midfield before getting a tow to pit road.

Dance was involved in another incident on the very next lap that forced him to pit again and he fell to the very back of the grid. While this chaos ensued Fiallo had made his way into 11th by the second lap after starting 19th.

Muir pressured Estes until lap eight when a backmarker separated the pair and made contact with Muir. After suffering front wing damage in his collision Muir stopped to make repairs and came out in the midfield.

Fiallo continued to fly through the field and made his way into fourth by lap 12. Estes held a comfortable lead over Flannery in second for the remainder of his first stint. Muir ran into more trouble with backmarkers on lap 15 as Trey Cook spun at turn one and Muir crossed the hill and struck the side of his car. Muir decided to retire from the race after going several laps down due to the collision.

On lap 31, Fiallo’s charge came to an end as he spun at turn one and collected two other cars including Cameron Dance. A full course yellow on lap 34 allowed most drivers to get a free stop, including Estes.

Estes coasted to the finish as Flannery failed to challenge for the lead on the restart. Michael Day rounded off the podium for his best finish of the season. Estes closed the gap to Dance at the top of the championship, but after recovering to fifth at the checkered flag Dance was able to maintain his championship lead.

The next round of the AMP eSeries will take place at Iowa Speedway next Wednesday at 9 PM. The return to oval racing will surely shake up the field so make sure you tune in to Facebook Live for the broadcast.

What It Takes to Be a Kid Competitive Karter: Meet Our Members Luke & Mike Giglio